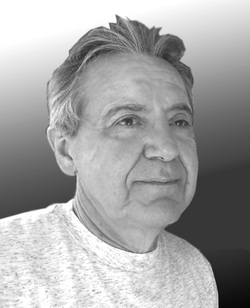 0John Vacratsis is a Canadian artist, who was born in Greece but  raised and educated in Windsor. He graduated with a  B.F.A.  in Visual arts from Eastern Michigan University in 1969 and also from Syracuse U. with an M.F.A. in sculpture  in 1972.  After teaching at Memphis State U. ,Syracuse U., Athens Center for Creative Arts, Interlochen Academy and Lowe SS, he became the first Director and Visual arts teacher at Walkerville’s  Centre For The  Creative Arts ( WCCA).  Exhibits also include one–man shows at the Universities of Windsor, Syracuse and Memphis; and at private galleries in Windsor, and in Athens Greece.  Group shows include Goddard College, Everson Museum, Dulin National Print and Drawing Show, Southwest International, Artforms /Kitchener-Waterloo, Breatheart Group  Common Ground Gallery , Artspeak Gallery, Nancy John’s Gallery, Leamington Art Gallery , the State  of Tennessee permanent collection touring exhibit and arts festivals in Windsor, Leamington, Amherstburg, Barrie, Tobermory , Goderich , Port Elgin ,Fenelon Falls, Gravenhurst, Sarnia and Niagara on the Lake. John was the inaugural winner of the  2019 Artbattle Windsor... a competition juried by the public of paintings created in 20 minutes by 12 local artists. John is also a frequent participant in the Windsor Essex open Studio Tour.

John was one of 4 featured artists in a NY public Television documentary: ARTISTS AND TECHNOLOGY. He was also selected by Arts Council-W&R for a Mayor’s Award of Merit in the Arts  in 2003. Mr. Vacratsis is represented in many private collections.